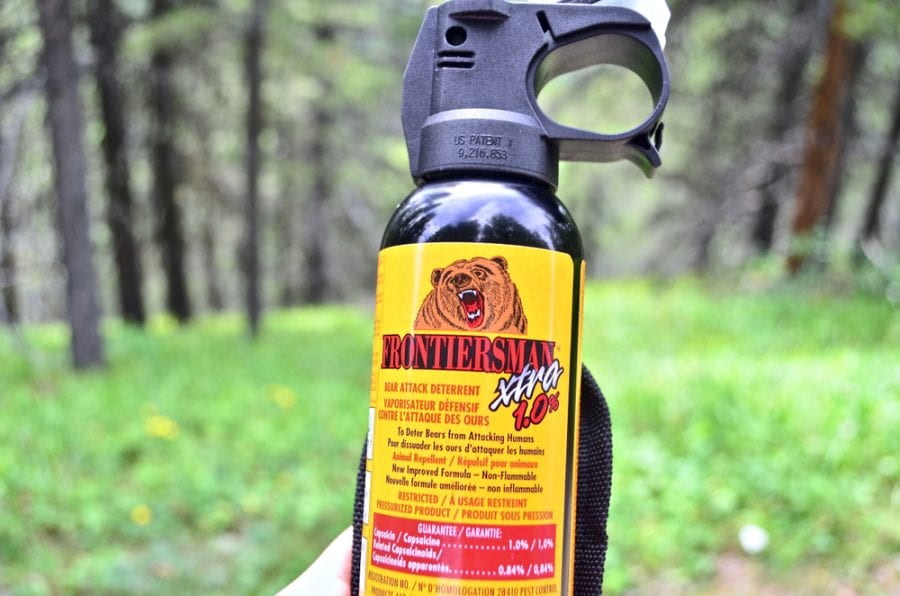 Bear spray is an essential piece of gear for anyone traveling in bear country.

But how much do you really know about bear spray?

These days, there are a whole lot of misconceptions about bear spray and how it actually works. While you don’t need a Ph.D. in bear biology to use bear spray, it is important that you understand the basic facts of how it works if you want to protect yourself in the wilderness.

To help you out, we’ve put together this article to debunk bear spray myths once and for all. Coming up, we’ll discuss some of the biggest misconceptions about bear spray and will give you the truth about this vital piece of gear.

Myth 1. Bear spray and pepper spray are the same thing

This is arguably the biggest bear spray myth out there, so let’s clear the air.

While both bear spray and pepper spray are made with the same compound (oleoresin capsicum), bear spray is specifically designed for bears. It is federally regulated and, by law, cannot have more than a 2% concentration of oleoresin capsicum in order to protect the bears from unnecessary harm.

Bear spray is also designed to shoot farther and to create a wider spray cone than your standard pepper spray.

So, while bear spray is expensive, it’s worth investing in the right gear when your safety is on the line.

Fact : Bear spray and pepper spray are not the same thing.

Myth 2. Bear spray is less effective than a gun

In any conversation about bear safety, people invariably try to argue that guns are a more effective method of protection against bears than bear spray. However, studies have shown that this just isn’t the case.

When it comes to grizzly bears and black bears, bear spray is more effective than a gun as a method of self-defense.

Yes, guns are lethal weapons that can kill bears. But the likelihood of successfully aiming a gun at a bear to stop it when it’s charging you is quite low. Plus, you’re more likely to seriously hurt yourself with a gun than you are with bear spray.

Fact : Bear spray is the better choice for self-defense in black bear and grizzly bear habitat.

Myth 3. You can use bear spray on your tent to scare away bears

Unfortunately, bear spray is a bear deterrent, not a bear repellent. Unlike bug spray, bear spray won’t keep the bears away if you spray it on your gear or on yourself.

In reality, bear spray can attract bears after it’s been deployed because it smells like pepper.

So please, don’t spray your gear or yourself with bear spray. Instead, use bear spray only if you’re being actively charged by a bear in the mountains.

Fact : Bear spray is only effective when sprayed on a charging bear.

While there’s no guarantee that bear spray can’t seriously injure a bear, it’s very unlikely that this will happen.

Bear spray in the US and in most countries is highly regulated so it’s designed to cause temporary discomfort for the bear rather than a lifelong-injury.

Of course, there is a chance that a bear could hurt itself while running away from you and your bear spray. But the effects of bear spray’s active ingredient usually wear off in a few hours.

Fact : Bear spray is designed to cause temporary irritation and discomfort to the bear to stop them from charging at you.

While it’s important that you do what you need to do to protect yourself in a dangerous situation, bear spray should not be your defense mechanism of choice. Yes, bear spray and pepper spray both have the same active ingredient, but bear spray is not an ideal self-defense tool.

Well, as we’ve mentioned, bear spray is substantially less potent than pepper spray. Since bears have more sensitive senses of smell and eyesight, only a small amount of oleoresin capsicum is needed to irritate them and send them running away. Meanwhile, you’ll need a much higher concentration of pepper spray to really stop a violent person in their tracks.

Finally, in many jurisdictions, it is illegal to carry bear spray for any other purpose than for protection from bears. So, carrying bear spray for self-defense could lead to legal ramifications.

Fact : Pepper spray with its higher pepper ingredients is more effective against humans.

Myth 6. You can approach a bear if you have bear spray available

Simply put, there’s no good reason to approach a bear, regardless of whether or not you have bear spray.

While carrying bear spray can make you feel invincible, purposefully approaching wildlife is not a good idea unless you’re a trained professional. In many places, including in national parks like Shenandoah and Acadia, approaching wildlife can even be considered wildlife harassment, which is illegal.

To be clear, you won’t get in trouble if you accidentally surprise a bear while you’re hiking or if an animal wanders into your campground. But the point is that no bear spray canister or any other piece of gear for that matter is going to provide you with 100% protection if an animal attacks.

As a result, it’s best to keep your distance from wildlife, especially large mammals like bears, at all times – even if you have to bear spray at the ready.

Fact : Having a bear spray doesn’t imply you can approach a bear.

Myth 7. The best place to store bear spray is in your backpack

Many hikers know that they ought to carry bear spray when in bear country, which is awesome. However, your bear spray isn’t going to do anything for you if it’s buried deep in your pack during a bear encounter.

If you do get charged by a bear, you’ll have only a few seconds to react before things really take a turn for the worse. We can assure you that an aggressive bear will not give you enough time to reach into your hiking backpack to grab your bear spray.

Thus, anyone carrying bear spray needs to carry it in a way so that it’s readily accessible.

Most bear sprays now come with holsters that you can easily attach to the hip belt of your backpack or to the belt loop on your hiking pants. You can also buy purpose-built harnesses for bear spray if you so desire. The key, though, is to ensure that your bear spray is easily accessible at any given moment.

Fact : You only have a few seconds to reach and activate the bear spray while it is charging towards you.

Myth 8. You only need bear spray while hiking

If you’re in known bear territory, such as Yellowstone National Park, it’s imperative that you have bear spray on you at all times. This is, of course, most important when you’re hiking as the chances of accidentally startling a bear are much higher when you’re moving quickly down a trail.

Nevertheless, bear encounters can happen anywhere in bear country. This includes at your campground or while you’re answering nature’s call in the middle of the night in Glacier National Park.

Therefore, anyone traveling in bear country should have bear spray at the ready at all times. If you’re adventuring in a group, there should always be 1 bear spray with the group at your campsite.

You should also have a spare bear spray so that anyone going to use the bathroom or to fetch water also has a means of protection against wildlife.

While we wish bear spray did work instantly, this just isn’t the reality. Every single encounter with a bear is different so there’s no universal truth out there about how quickly bear spray will work to stop a bear after it’s deployed.

For the most part, bear spray will start to affect a bear within a few seconds of being deployed, though this can vary based on the size of the bear, the wind direction, and its aggression levels.

This is why it’s important to continue pressing down on the trigger of your bear spray canister until the bear starts to retreat. When this happens, you can slowly back away from the bear and head to a safe location to recover from your encounter.

Fact : There are other factors involved such as bear size, wind direction, and spray accuracy.

Indeed, oleoresin capsicum can affect any animal with moist mucous membranes and porous skin. This includes all mammals, including humans, moose, mountain lions, and bison.

Of course, this doesn’t mean you should go around spraying wildlife with bear spray for no reason (that’s highly illegal in most places).

But if you’re minding your own business in the Adirondacks and you’re approached by an aggressive animal that charges at you, bear spray can be an effective defense.

Fact : Bear spray can affect other animals to a varying degree.