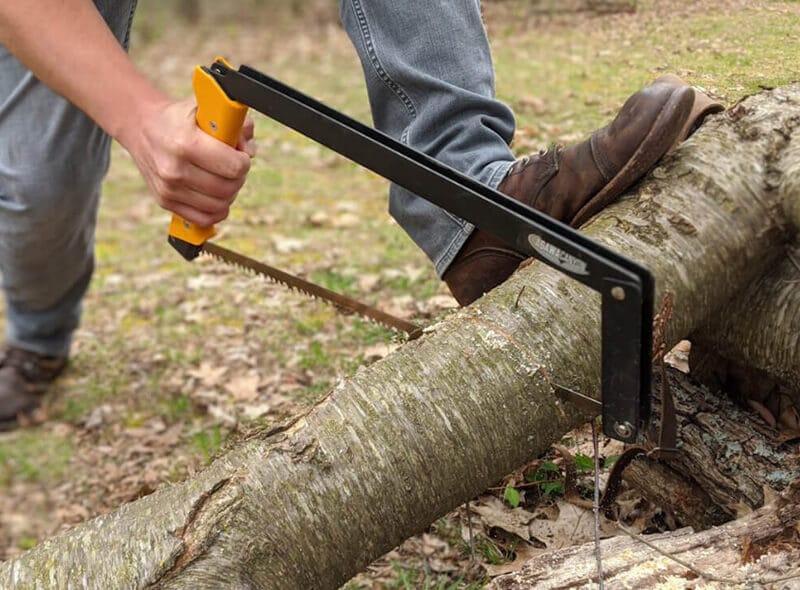 On the lookout for the best camping saw for your upcoming backpacking trip?

A camping saw is a vital piece of gear if you’re looking to travel off-trail or making a roaring bonfire at night. However, there’s so much technology jam-packed into a camping saw that it can be difficult to know which one is right for you.

Read More : 5 Things To Look for in a Camping Saw

There are three features that make a great camping saw, including :

Here are our top picks for different types of camping saws. Read on for more details and other recommendations.

Best for Folding Saw : Gerber Gator Exchange-A-Blade
“Made from high carbon stainless steel for long-lasting durability and better edge retention after years of use.”

Featuring two fully swappable blades, the Gerber Gator Exchange-A-Blade is made from high carbon stainless steel for long-lasting durability and better edge retention after years of use.

It’s easy to swap the two blades out on this saw so you can have the right tool for a given cutting job. With this saw, you can choose between a coarse blade for quickly cutting wood and a fine blade for smooth precision cuts.

The Gerber Gator Exchange-A-Blade Saw also packs down to just about 6.5” (16.5cm), and is one of the lightest on the market for a wood cutting tool this size.

The Silky Gomboy is a great companion for any backpacker, thanks to its compact size and lightweight. It also comes with its own hard plastic carrying case for added protection in the mountains.

As far as functionality goes, this saw has an 8.3” blade with 6.8 teeth per inch (TPI). That means it’s a good choice for cutting most medium-sized tree branches to make a fire.

The Silky Gomboy Folding Hand Saw is also made with chrome-plated steel that resists damage from tree resin and reduces friction on each cut for added efficiency.

For quickly cutting wood in the backcountry, the Bahco Laplander is a solid option. This saw features a stainless steel blade with 7 teeth per inch for a good mix of precision and cutting efficiency.

The handle is made from plastic that’s molded for the perfect grip. Meanwhile, a leather strap makes it easier to pack and carry on the trail.

Finally, the Bahco Laplander Folding Saw packs down to a small size for added compactness. The blade on this saw also locks when open and folded, for added safety in the outdoors.

Built for quickly cutting small- to medium-sized branches, the Corona Razortooth is a convenient companion for backcountry pursuits.

It has 6 teeth per inch on a chrome-plated high carbon steel blade for maximum cutting efficiency on every stroke. Plus, the teeth on this saw are three-sided to help you cut wood more effectively.

Where the Corona Razortooth Folding Saw really shines, though, is in the handle. It has an ergonomically designed plastic-molded handle with rubber overlays and a pistol grip to prevent hand slippage while cutting.

If you need a saw that’s super compact, the Nordic Pocket Saw might be your best bet.

This award-winning pocket chain saw is built using heat-treated high carbon steel and features 33 burly teeth for making super efficient cuts. Thanks to these strong teeth, this pocket chainsaw can take on medium-sized tree trunks and branches with relative ease.

It also has two nylon straps that provide a secure grip while cutting. Plus, the Nordic Pocket Chainsaw comes with a small carry pouch for easier transport in your pack.

The Homyall Limb Rope Saw is a good overall pocket chainsaw for big cutting jobs. It has 62 sharp high carbon steel teeth that hold an edge well, even after frequent use.

This saw has blades on all sides of its teeth, so you don’t have to worry about orienting it perfectly before you start cutting. Additionally, it has two nylon webbing handles that allow for exceptional control over the saw as you work.

The Homyall Limb Rope Saw fits in its tiny carrying case for easy transport. Plus, despite its long length, this pocket chainsaw is still one of the lightest and most compact on the market.

Crafted with efficiency in mind, the Croc Survival pocket chainsaw is a revolutionary new cutting tool for tough jobs.

It has 92 teeth with a rugged crocodile tooth style-design that allows for faster cutting of larger tree trunks. The teeth on this saw also come super sharp straight from the factory and are made from quality steel that can hold an edge.

What sets the Croc Survival Pocket Chainsaw apart is its two molded plastic handles that provide a comfortable grip and impeccable control. The whole set also stows away in a tiny carrying pouch for easy transport.

With all the benefits of a bow saw in a compact folding design, the Sven Folding Saw is a great companion for rugged outdoor adventures. Its lightweight aluminum frame easily collapses to a compact size for easy storage on the go.

The saw’s blade is made from Swedish steel that’s designed for quality and durability. It can easily slice through a 6” log in about one minute to help you save time while you’re camping.

Plus, unlike many other bow saws, the Sven Folding Saw collapses down on itself for storage. The blade folds into the saw’s handle, eliminating the need for a sheath.

Simple, yet effective, the Irwin Combi Saw is a classic bow saw for use in any conditions. It is made using a welded steel frame that’s sturdy and stable for a faster cut.

The blade on this saw is constructed from stiff steel that doesn’t flex or give way as you slice through wood. That way, you can be more efficient with every single cut.

For added safety, the Irwin Combi Saw has a knuckle guard to protect your hand during the cutting process. This knuckle guard also comes with an ergonomic grip to give you more control over the saw.

Spring Creek Tuff Camp Saw is designed to take on large size logs with ease. Its 21” blade can handle downed tree trunks up to about 12” long, slicing through them in just a few minutes.

Unlike many other bow saws, this model has an aluminum blade, which helps to save weight in your pack. Aluminum blades are also rust-resistant for lasting durability.

Moreover, Spring Creek Tuff Camp Saw folds down and stores the blade inside the handle to eliminate the need for an additional sheath while camping.

Camping saws come in so many different shapes and sizes, so it’s critical that you know precisely what to look for when searching for your next wood-cutting buddy. Up next, we’ll walk you through the basics so you can find the right saw for your needs.

Here are 5 of the most important things to keep in mind as you shop for a camping saw.

There are three main types of camping saws, each with their own advantages and disadvantages.

Here’s how they stack up in the real world.

A pocket chainsaw is generally the lightest and most compact option for someone that needs a camping saw. These nifty saws feature a single chain of burly teeth that can be wrapped around a log to slice it in just a few minutes.

Most, such as the Nordic Pocket Saw, also fit into a tiny carrying case for transport.

In terms of overall cutting ability, pocket chainsaws are hard to beat, as they can cut through sizable logs and tree trunks with relatively little effort.

However, pocket chainsaws are not as useful if you’re looking to cut through smaller branches and logs because they can become unwieldy and inefficient if wrapped around any branches under about 6” wide.

This is especially true for longer pocket chainsaws, like the Croc Survival Pocket Chainsaw and the Homyall Limb Rope Saw.

Folding saws are a close second to pocket chainsaws in terms of compactness, but are more versatile for use with smaller and medium-sized logs.

That being said, folding saws tend to be less efficient than both pocket chainsaws and bow saws because they have smaller blades.

This means you need to complete more strokes to cut a similarly sized log using a smaller folding saw than you would with an alternative option.

Bow saws offer a thinner blade than what you’d find with a folding saw. Therefore, they are generally more efficient at cutting because they can easily slice through wood.

However, even folding bow saws tend to be bulky because they have longer blades than what you’d find on a more traditional folding saw.

So, if overall ease of cutting is your goal, a bow saw is a solid option. But, this ease of use comes with both added weight and bulk in your pack.

There are three main aspects of blade design that affect the overall performance of your camping saw:

Longer saw blades are more efficient because you can cut more with a single stroke. However, longer blades are heavier and harder to pack.

Saws can have straight or curved blades. Straight blades are best for larger logs while curved blades, such as what’s found on the Gerber Gator Exchange-A-Blade and the Silky Gomboy Curve make it easier to quickly cut up smaller branches.

Saws with more teeth per inch will provide you with a precision cut that’s smoother and more controlled. But, this added precision requires more time and effort.

Meanwhile, lower TPIs mean you can cut wood faster and more effectively, even if it’s a bit rough around the edges.

On the other hand, some saws, such as the Spring Creek Tuff Camp Saw, use aluminum for their blades because it is lighter and rust-resistant. However, aluminum tends to be quite pliable and is more likely to break with frequent use.

While the blade of a saw is important in terms of cutting ability, the quality handle is critical for providing you with a solid grip on your saw.

Here are some important things to look out for in a saw handle :

In general, any saw under 1.5lbs (0.7kg) is considered acceptable for a camping saw.

Additionally, it’s ideal to have a saw that packs down to less than 12in (30.5cm) for transport. Portability is particularly important for backpackers but is a good thing to keep in mind regardless of your camping style. 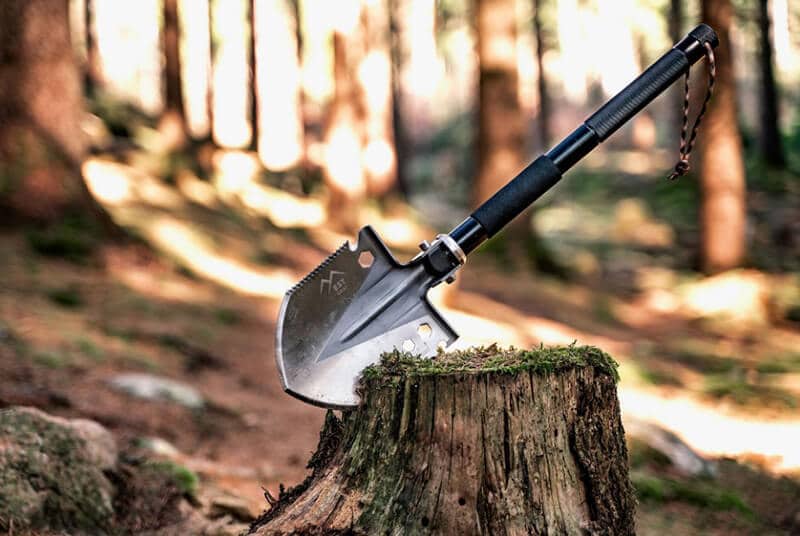 The Best Camping Shovels in 2022 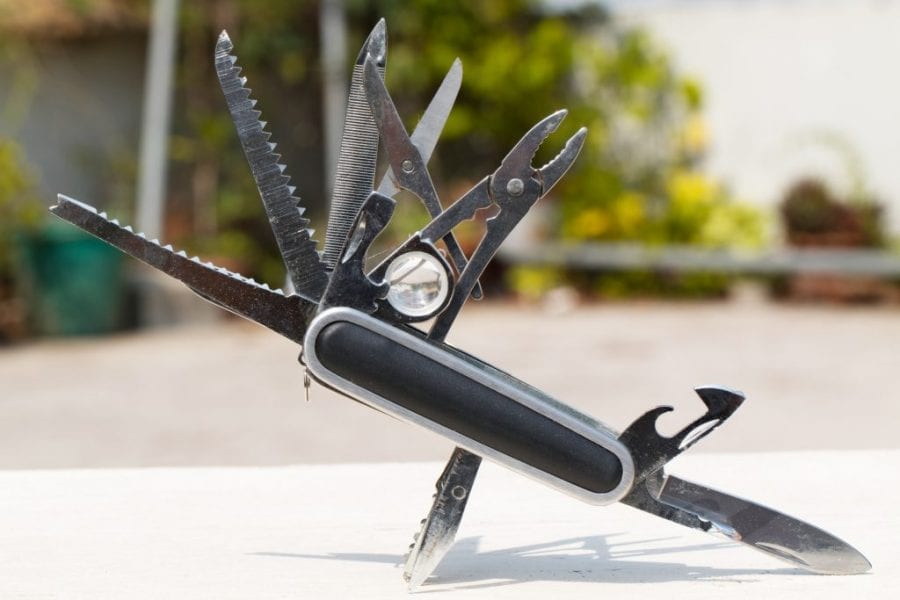 The Best Camping Multi-Tools in 2022 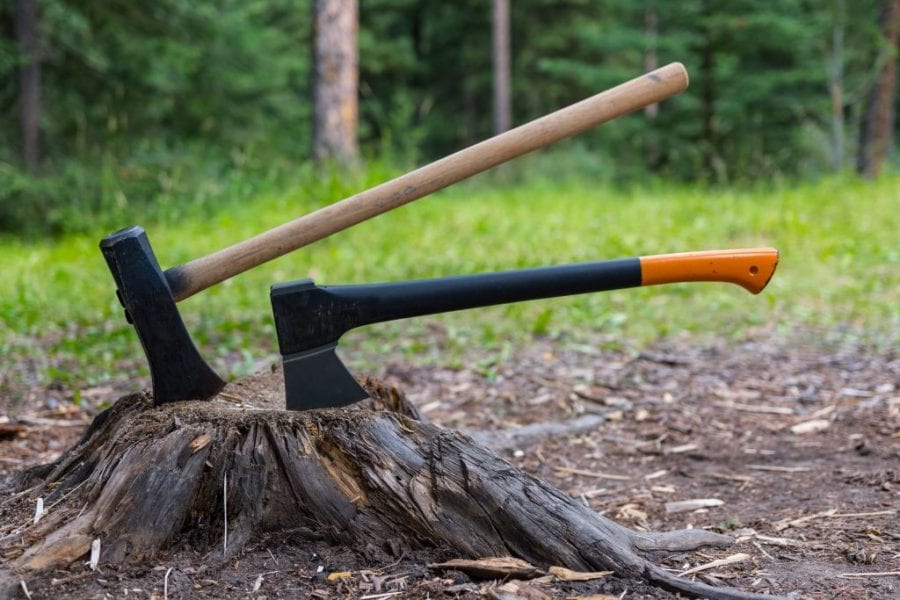 The Best Camping Hatchets in 2022