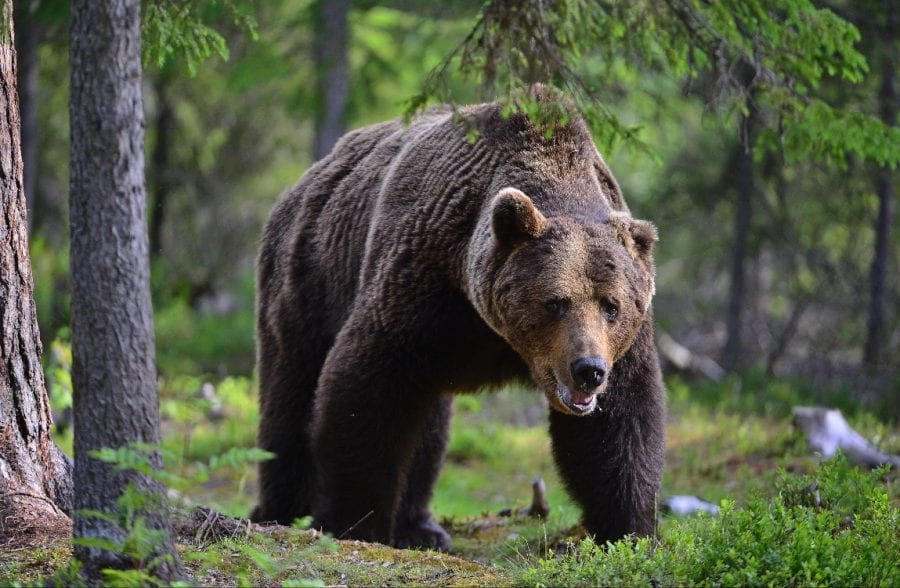 Often heralded as the perfect tool for protecting yourself from bears while you hike, bear spray is a must-have piece of gear for campers in places like Rocky Mountain National Park.

But, does bear spray actually work?

Yes, it does, if used properly.

But if you’ve ever wondered how a tiny can of pepper spray could possibly stop a big bear, then we’re here to clear the air once and for all.

In this article, we’ll discuss everything there is to know about bear spray and how it works. That way, you can be confident in your gear when you head into the mountains.

How effective is a bear spray?

This is because the bear spray is made from oleoresin capsicum, which is a concentrated oil derived from hot peppers. When this compound gets into the eyes, nose, and other mucus membranes of any mammal (humans included), it causes irritation, pain, and a stinging sensation – ouch!

However, no bear spray is 100% effective. There are many reasons why bear spray might not work in a given situation. But, most of the time, the issue has to do with improper use of the bear spray itself.

Moral of the story?

Bear spray is very, very effective when used the right way. However, proper training is necessary if you want to use bear spray properly.

Does it work for all bear species?

Yes, bear spray does work for all bear species, including grizzly bears and the American black bear.

In fact, since bear spray works by inflaming mucus membranes (such as the eyes, nose, and mouth), it can actually work against any mammal, including moose.

That being said, researchers weren’t sure until relatively recently whether or not bear spray would be powerful enough to ward off certain large bears, like polar bears. Luckily, new research shows that bear spray is effective against polar bears, even in cold and windy environments.

However, many regions with sizable polar bear populations have rules about what types of bear repellents you’re allowed to use. At the same time, many national parks, such as Yosemite National Park, don’t allow hikers to carry bear spray.

So, it’s important that you check the regulations in whatever area you’re visiting before you pack bear spray for your trip.

While bear spray and pepper spray might both be used for self-defense, it’s important to note that they are not the same thing.

The difference, however, is that bear spray is highly regulated in the United States (and in many other countries) and it is designed specifically for use against wildlife. Some of the major differences between bear spray and pepper spray include :

We know what you’re thinking.

Why would I carry a non-lethal deterrent, like bear spray, for protection when I could carry a gun that could stop a bear in its tracks?

It turns out that, contrary to what many of us might think, bear spray is more effective than a gun in the vast majority of bear encounters.

While it is true that a lethal weapon, like a high-caliber firearm, is strong enough to kill a bear, studies have shown that carrying a gun doesn’t offer any more protection in most circumstances than carrying bear spray.

There are a few exceptions to this rule, however. In places with large polar bear populations, such as the archipelago of Svalbard, firearms are required by law for protection against bears.

When to use a bear spray?

There is only 1 situation where hikers should use bear spray – when a bear attack is imminent. This means that you should only deploy your bear spray if a bear is aggressively making its way toward you.

Bear spray should not be used if a nearby bear doesn’t seem to really care that you’re there. You should have your bear spray ready, just in case, but you shouldn’t spray a bear just for walking around in its natural habitat.

Additionally, bear spray is not a repellent.

You should not pre-spray objects, like your 2 person tent or backpacking chair, while camping in Yellowstone National Park. Doing so can actually attract bears because pepper spray is made with red pepper oil that smells like food to a hungry animal.

How to use a bear spray effectively?

Using bear spray effectively requires a lot of practice to do properly. With that in mind, here are some key things to remember when using bear spray :

What happens to the bear when sprayed?

When a bear is sprayed with bear spray, it will likely be very disoriented. The bear will usually lose its vision for a few minutes and try to stumble away from the threat (that’s you).

However, some very aggressive bears may still try to attack you if they weren’t directly hit with the spray. That’s why it’s important to properly aim your bear spray at the bear’s nose and mouth for the best possible protection during an attack.

What should I do after spraying?

After spraying a bear with bear spray, your first priority is to get out of the general vicinity of the bear attack. As soon as everyone is able to move, gather yourself and head to a safe area that’s at least a few hundred yards away, if not more, just in case the bear decides to return.

Can bear spray cause harm to humans?

Bear spray can cause harm to humans, though it’s usually not serious or life-threatening.

Anyone that is accidentally or purposefully sprayed with bear spray can experience irritated eyes, itchy noses, tearing of the eyes, and temporary loss of vision.

Some people also experience substantial pain and itchiness when bear spray is sprayed onto their skin. These effects usually wear off after a few hours or days.