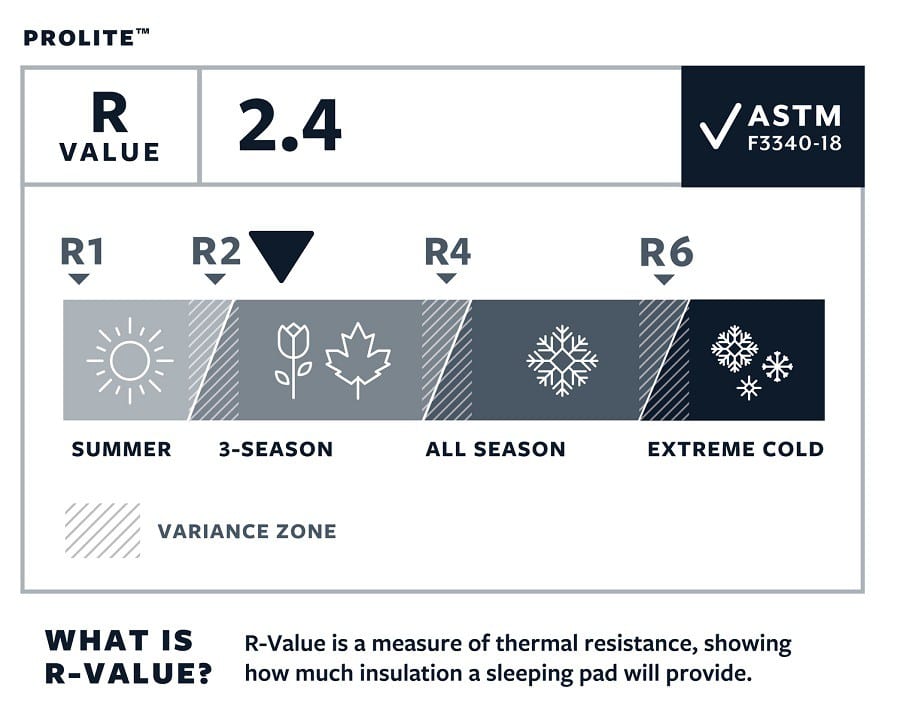 In the market for a new sleeping pad but a little confused as to what an R-value is?

Worry not, we’re here to help.

We want you to have all the information you need to get the best possible gear for your upcoming camping trip.

So, we’ve created this introduction to the world of sleeping pad R-values and how they affect your outdoor experience.

What is a sleeping pad R-value?

The higher the R-value, the better insulated the sleeping pad.

Okay, well, technically speaking an R-value is a measure of what’s called thermal resistance. If we want to get nit-picky, thermal resistance is the ability of an object, such as a sleeping pad, to resist the flow of heat or, in other words, to insulate.

Therefore, gear manufacturers use R-values to tell us how well insulated a sleeping pad is since the insulating ability isn’t always correlated with other specs, like weight, bulk, and comfort.

Why are sleeping pad R-values important?

It turns out that R-values aren’t only used in the outdoor gear world. In fact, many other industries, including the construction and aerospace industries use R-values to test the insulation abilities of their materials, such as fiberglass and windows.

It’s all because knowing the insulating abilities of materials is really important. This is particularly true when it comes to camping gear as your equipment needs to be able to protect you from harsh conditions.

When it comes to sleeping pads, knowing the R-value can help you make a better decision about which type of pad is right for your camping needs. That’s because sleeping directly on the cold ground or on a sleeping pad that’s not warm enough for the conditions – can lead to an uncomfortable night’s sleep.

Our bodies actually lose quite a bit of heat through conduction or direct contact, so sleeping on the cold ground can be a recipe for disaster in the mountains.

In fact, in very chilly situations, such as when you’re curled up in your winter sleeping bag on a January ski trip to Rocky Mountain National Park, using a sleeping pad with too low of an R-value can even increase your risk for life-threatening conditions, such as hypothermia.

What’s the difference between R-Value and temperature rating?

Although the majority of gear manufacturers now use R-values for rating the warmth of their sleeping pads, you may still see some models listed with a temperature rating, such as 20ºF (-7ºC), much like what you’d find with a sleeping bag.

Moreover, even if a sleeping pad is given a reasonable temperature rating, this is only a suggestion, not a hard and fast rule. Indeed, there are plenty of external environmental variables that can affect how well a sleeping pad performs at a given temperature.

As you can imagine, this isn’t very helpful for you as you shop. So, it’s generally best to use R-values when comparing sleeping pads, instead, as they are a scientific measurement that directly indicates the insulation ability of your gear.

How are sleeping pad R-values rested?

Sleeping pad R-values are measured using the guidelines written out in ASTM F3340-18, which is a universal standard for testing the insulation in a sleeping pad.

Performing this test involves a highly specialized machine and a purpose-built cold chamber, which is kept at a balmy 39ºF (4ºC).

In particular, the R-value testing machine completely surrounds the top and bottom of the sleeping pad using 2 large metal plates. During the test, the bottom of the plate stays very cold while the upper plate is heated in order to maintain a specific temperature. This mimics what it would be like if you were lying on top of this sleeping pad during a winter camping trip to, say, Glacier National Park.

When the test is over, the machine transmits information to a computer, which displays just how much energy the machine needed to use to maintain its constant warm temperature. As a result, this test tells us how well the sleeping pad actually insulated the warm top plate from the cold bottom plate.

Then, the computer runs these metrics through an algorithm and gives us the sleeping pad’s R-value. The higher the R-value, the better insulated it is against the cold.

How to use R-value to choose a sleeping pad?

Understanding R-values and how manufacturers determine them is important, but what’s more critical to your camping needs is knowing how to use this information to choose an appropriate sleeping pad.

R-values vary quite a bit, but you can generally find sleeping pads that are rated between an R-value of 1 and 9, with the higher value indicating a better insulated sleeping pad.

In this section, we’ll talk more about which sleeping pad ratings are appropriate for your preferred type of camping.

While a higher R-value might indicate better insulation, if you predominately camp in warm environments, purchasing a more heavily insulated sleeping pad might be unnecessarily heavy and expensive.

Meanwhile, folks that like to camp in a variety of environments or throughout the year may actually find that they need multiple sleeping pads, each with different R-values to best meet their needs.

If you want just one sleeping pad that’s appropriate for all but the most extreme cold environment, the more or less accepted option is one with an R-value of 3.5 to 4.5.

However, keep in mind that there are other factors at play when it comes to your warmth, such as the temperature of your summer sleeping bag and the clothes that you wear when you go to bed.

So, even these pads may not be insulated enough in all conditions.

What R-value should I choose for 3-season sleeping pad?

Most people on the market for a 3 season sleeping pad primarily go camping during the summer but they frequently venture out during the chilly months of the fall and spring.

In these situations, a sleeping pad with an R-value of 2 to 3 is most appropriate.

But, if you only camp in the summer in locales where the nighttime temperatures are very warm, you might find that a model with an R-value of 1 to 2 is more than enough for your needs.

What R-value is best for winter camping?

Getting a sleeping pad for camping is quite tricky because wintertime temperatures vary substantially from one place to the next and from one night to the next.

In general, a sleeping pad with an R-value of 4 is considered an absolute minimum for winter camping, but this might not be warm enough in snowy or very cold places.

For particularly cold locales, you’ll want to consider a pad with an R-value of at least 6 and you may even need to use 2 sleeping pads to insulate you from the ground. 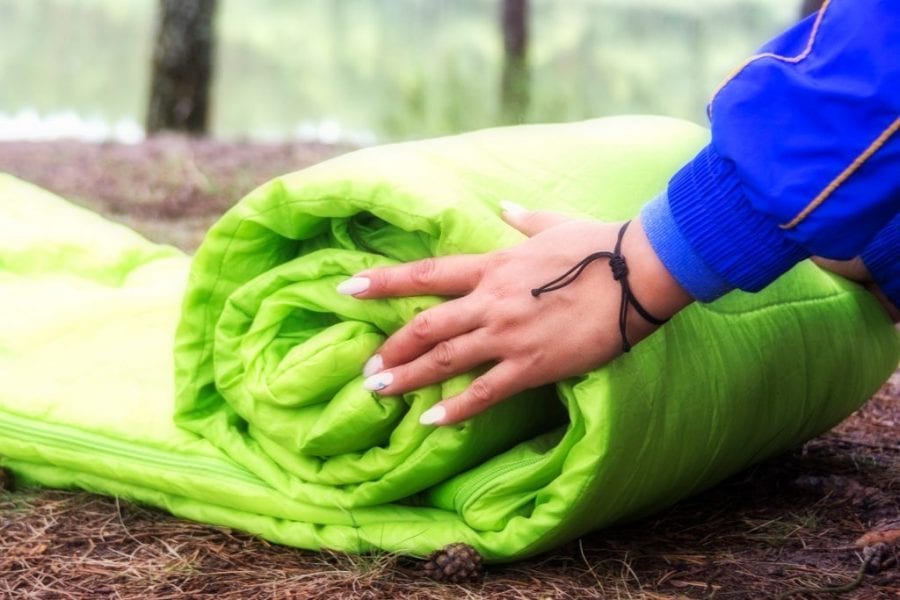 The Best Sleeping Bag Liners in 2021 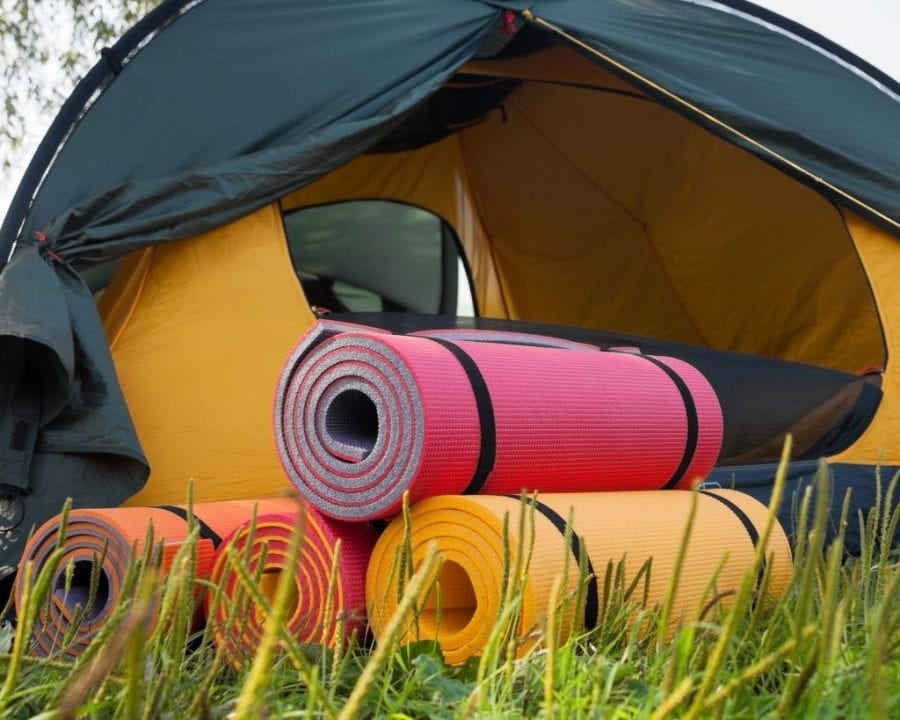 The Best Camping Sleeping Pads in 2021 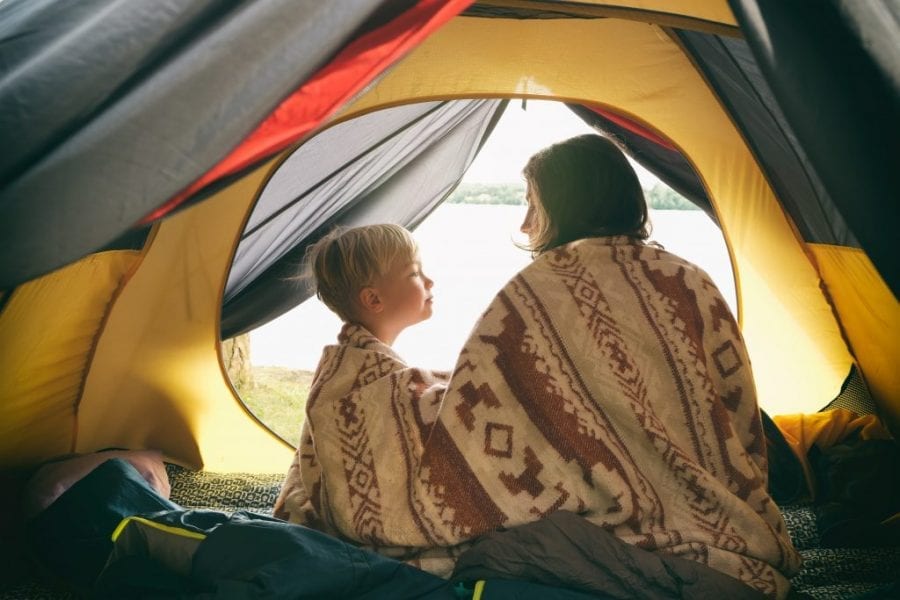 The Best Camping Blankets in 2021